I have uploaded release 66 of SpookyGhost to Itch.io and there are quite a bunch of new features that I am excited to share with you. :) 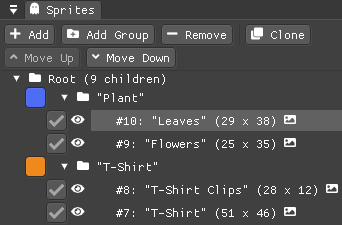 There is now an Add Group button in the Sprites window that allows you to create sprite groups. You can use them to organize your sprites similarly to layer groups in paint applications.

Both sprites and groups shows a small colored square that you can use to identify the corresponding animations in the Animations window. You can also click those squares to change the color.

Another addition is the spritesheet layout option in the Render window. With it you can arrange frames the way you like, in a rectangle sheet, a horizontal strip, etc.

Thanks to the latest ImGui versions it is possible to disable buttons instead of just hiding them. A welcome change when you are moving up and down sprites, for example. ;)

It is now possible to edit sprite and animation names directly in the Sprites or Animations window by pressing the [CTRL] key and clicking on an entry in the tree list.

You can now load a different texture without breaking the association with its sprites. Just press the Reload button in the Textures window for a file requester to open.

You can also change the texture used by a sprite without changing any of its properties or affecting any associated animations.

There is a new slider in the Animations window. It is a global speed multiplayer that you can use to affect the speed of all animations when playing or rendering them. Keep in mind that it doesn’t get saved with a project.